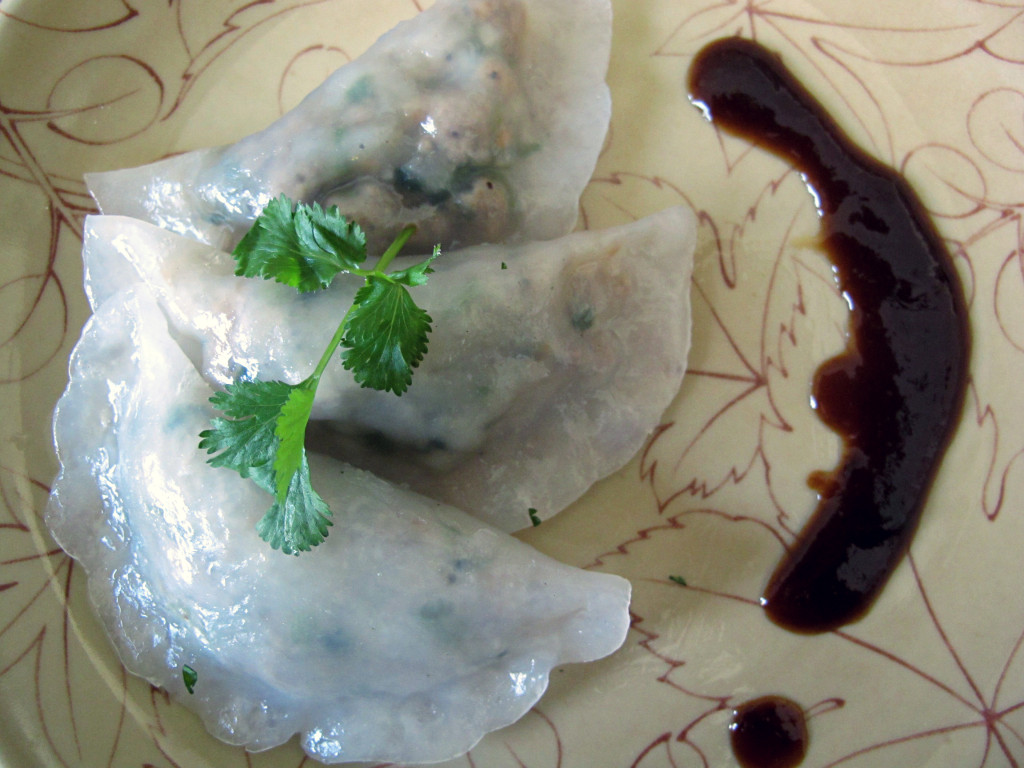 During my short visit to LA I made plans with my best-est cousin Mitzi, my two aunts and my grandmother to make White Water Dumplings (白水角). But to be more accurate, it’s a steamed dumpling with finely minced pork and Jicama. So far I’ve featured 2 other dumpling recipes and like I said there would be more to come, these dumplings have a very different filling and a very different skin. The filling is coarser and doesn’t stick together like most dumpling fillings and the skin is translucent after steaming, just like the shrimp dumplings  (蝦 餃) you get at dim sum. My grandmother makes these for me every time I visit LA – or more like I make them while she tells me what to do.

So first things first, I’m in the kitchen prepping and waiting for Mitzi to come downstairs to help me and I ask my aunts and uncles who are sitting in the kitchen where I can find a measuring cup. Like many other families, mine doesn’t believe in measuring cups, food processors, or writing things down. Everything is done by hand and from memory. For some reason everyone in the family is able to accurately recreate the same dish without any sort of recipe or measuring cup/spoons. It’s the kind of kitchen where you will find at least 3 people trying to assert their opinion on one dish, arguing over how much salt should be added but in the end you find that the dish always taste just right. If someone would just write down the recipe somewhere we’d eliminate a lot of bickering in the kitchen. However since my grandmother holds all the secrets to these delicious dishes no one in the kitchen knows better than her, even though from time to time someone will still try to argue over how much of what should be added.

So Mitzi and I were finally able to work out a system. Grandmother says “this is how much you add” and we put whatever it is into a blender that we found with cup increments, anything less than a cup we are shit out of luck – so we estimate and write it down. Once in awhile an uncle will come by and say ask why we’re using a blender to measure our ingredients. He’ll reach out, grab the dried shrimp in his hand and say, “see…you need a fistful” as if my handful is the same as his handful. And every time Mitzi and I proceed to put ingredients into the blender someone in the kitchen will immediately blurt out “Wait! Why are you blending it?” (I swear to you, this happened every time) and every time Mitzi and I repeat, “we don’t have a measuring cup!” and once again someone will say “but why do you need a measuring cup?” and the story continues – ahh the joy of cooking in a kitchen with 9 other aunts and uncles. So after all that measuring with our handy blender we’ve arrived at the final recipe and in the history of the Young family, this is probably the first time any recipe has ever been written down.

Rinse dried shrimp with warm water and drain. Soak in hot water for 20 minutes; use enough water so that it covers the top of the dried shrimp. Once softened, finely mince.

Peel jicama by making a small incision with a knife and pull the skin off. Mince jicama. I would suggest using a food processor; it makes life A LOT easier. But of course in this kitchen, no food processor to be found and yet still very possible to make this recipe work as Mitzi and I combined our efforts in finely mincing this vegetable root.

Combine jicama and water in a pot and bring to a boil. Once the water comes to a boil the jicama should be ready, approximately 15 minutes. Pour into a strainer and drain. Push jicama against the strainer with a spoon to get out any additional moisture and water.

In a large pan, stir-fry minced shrimp with a teaspoon of vegetable oil for a couple minutes and set aside. Using the same pan, stir-fry ground pork, stir consistently until browned, make sure that the pork is broken down into tiny pieces. Add salt, pepper and chicken powder. Add minced shrimp and jicama. You will find that you may have some left over jicama, you can add more if you feel like the mixture is too salty for your taste.  Add scallions and cilantro and stir.

Prepare the dough for the dumpling skins. Pour 1 bag of flour into a mixing bowl; add 3 tbsp of cornstarch, 1 tsp of salt and 1 ½ tbsp of vegetable oil and stir. In a slow steady stream pour 2 cups of hot water into the flour while stirring. Once a large lump has formed roll out the dough on a floured surface and knead for a minute or two. Warning: this will be HOT. Several cousins and aunts took turns kneading this boiling hot ball of dough. Divide the dough into two lumps and roll out with a rolling pin; you want the dough to be about 1/8 inch thin. Use a bowl or cup with a 4-inch diameter and stamp out the skins. Gather the left over dough and combine with the second lump of dough and repeat. Once you’ve used up all the dough made from the first bag of flour prep the second batch of flour. You don’t want to make both at once because the dough may dry out.

If you don’t have a steamer I would suggest using a wok or any large pot, put a small steamer rack on the bottom fill the pot with an inch of water and put your plate of dumplings on top. Steam the dumplings for 10 minutes. Do not lift the cover in mid steam. Meanwhile, prepare sauce by mixing together the soy sauce, hoisin sauce and water.

If you have left over filling and you don’t feel like making more dumplings you can make lettuce wraps using iceberg lettuce. Scoop some filling into a small piece of lettuce and drizzle the same sauce over it and it’s ready to go!

Just as it’s easier for a younger brain www.trymobilespy.com to pick up languages, athletic techniques, or musical instruments, it’s easier for them to pick up addictions, because it’s all just learning
Posted onMay 6, 2010January 13, 2017  |  TagsDried Shrimp Dumplings Hand Me Down Recipe Jicama Rice Flour Dumpling Savory