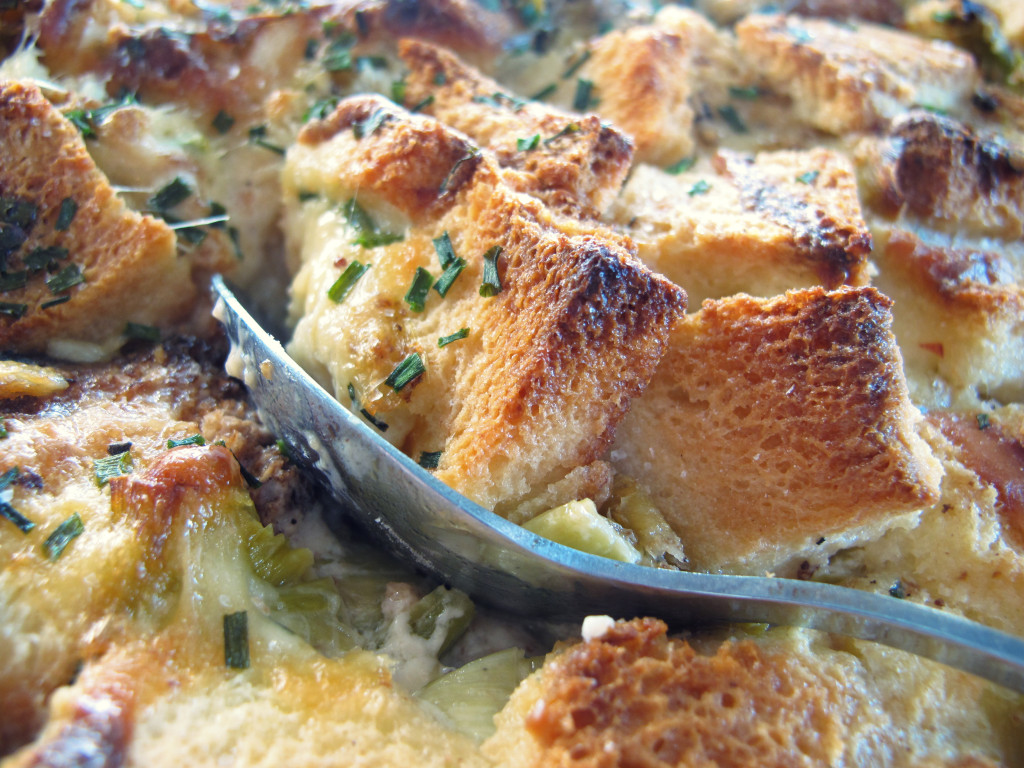 I had a crazy Thanksgiving this year, three meals at three different households, each time feeling like I’m so full I might die. Is the “Thanksgiving 15” a new thing? I think so.

Am I complaining? Not really. Not when I have an excuse to make my all time favorite Thanksgiving dish three times! This dish is the incredible Leek Bread Pudding from Thomas Keller‘s Ad Hoc cookbook. Sweet, savory, crispy and fluffy, it’s so delicious that it’s become a Thanksgiving staple for our family.

4 cups of 1/2 inch thick sliced leeks, (light green and white parts only). The original recipe called for only 2 cups but it tastes better with more.

12 cups of 1 inch cubed sandwich loaf. You can use any soft white bread (original recipe called for brioche or Pullman sandwich loaf).

Split leeks open lengthwise and thoroughly wash, by swishing around in a large bowl of water. Leeks tend to hide dirt inside its layers. Drain and slice leeks.

Melt butter in a pan over medium heat. Add leeks and stir to cover in butter. Cover pan, reduce heat to medium-low, and stir occasionally to make sure leeks don’t burn. Cook until leeks are soft. Season with salt and pepper to taste.

While leeks are cooking, arrange the cubed bread on baking sheets, and toast in the oven until dry and pale gold. Keep an eye on this because the bread burns easily. Set bread aside.

Once leeks are ready, combine leeks with the toasted bread, thyme and 1 tbsp of the finely chopped chives, and mix well.

In a mixing bowl, whisk together milk, eggs, heavy cream, salt and nutmeg.

In a large baking pan (9×13), sprinkle 1/4 of the shredded cheese on the bottom and layer toasted bread and leek mixture. Continue to layer cheese and toasted bread, ending with cheese. Pour milk and egg mixture into the baking pan so that it almost covers the bread. Allow parts of the bread stick out through the custard mixture, so it can brown nicely. Sprinkle remaining chives on top. Soak for 15 minutes.

Bake for 1 1/2 hours uncovered or until the custard sets.